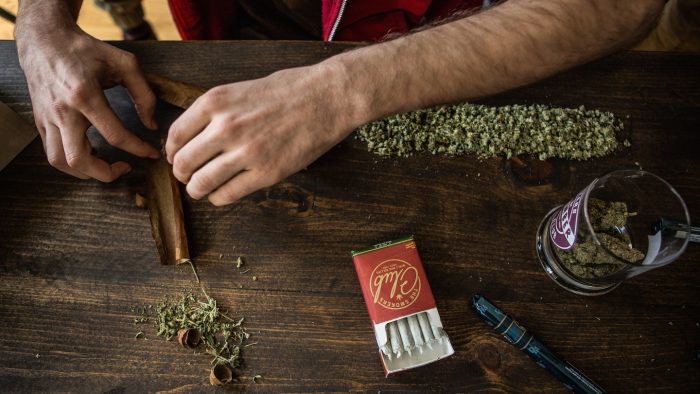 Celebrity marijuana smokers like Wiz Khalifa have come out strongly against smoking blunts, do they know something we don’t?

Is there a major difference between smoking your weed in a blunt wrap or a joint paper? Which leaves your marijuana tasting the best, is healthier for your lungs, and gets you the highest?

With all sorts of flavored rolling papers and blunt wraps out there, taste really comes down to two factors:

2. Impact on your weed’s flavor

Some people enjoy the taste of a little tobacco with their weed, and others don’t. Blunts do however, have a stronger impact on the flavor of your weed. If you just bought some top-shelf bud and really want to experience its unique flavors, a rolling paper is going to be the better choice.

Everyone knows tobacco can be addictive, so keep that in mind when mixing your weed with any kind of tobacco if you don’t already smoke it. Furthermore, a 1987 study found that marijuana affected the lung’s large airway functions, while tobacco affected the lung’s small airway functions. This means that mixing both is going to be harsher on your lungs that just smoking weed alone.

Anyone that has ever smoked a blunt can tell you that the mix gives you a potent, head-centered high that is different than smoking weed alone. But a 2009 study found that joints apparently increased blood THC levels more than blunts, and that most participants in the study reported feeling higher after taking puffs from joints rather than blunts.

While it seems that joints could be the better tasting, healthier, and more potent choice for smoking, blunt culture isn’t going anywhere. There’s a time and a place for everything, and the blunt has inarguably earned its spot in the Marijuana Hall of Fame, despite what the critics may say.