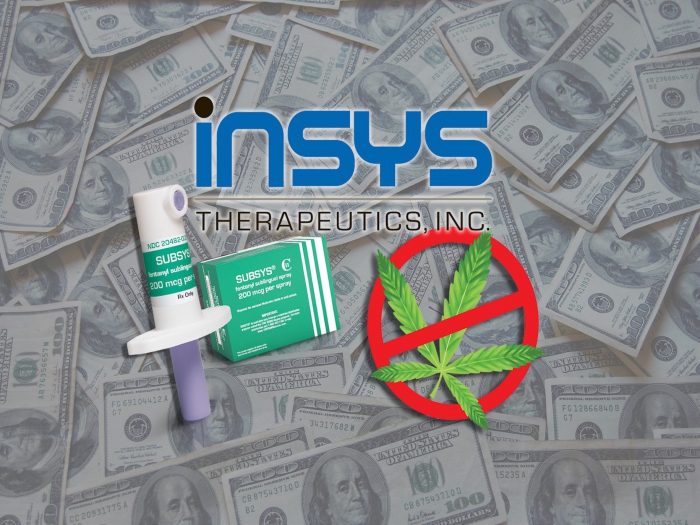 Insys is the world’s largest fentanyl manufacturer, which along with many other opiates, has killed more people to date than its helped. Insyns also mass produces opiate prescription pills such as Oxycontin, Hydrocodone, etc. Insys also has voiced their disagreement with marijuana legalization in Arizona so much so, the company donated $500,000 to keep marijuana illegal.

Syndros, The New Legal Cannabinoid Drug Approved By The FDA

Syndros is the first synthetic cannabinoid drug of our time. The FDA gave Insys the OK to continue production and now doctors across America can prescribe this dangerous synthetic blend of chemicals. Insys posted the potential side effects of their new drug which is extremely contradictory to their stance on marijuana. Some of the following side effects include:

What Is Syndros Prescribed For?

Syndros is for the use in patients with AIDS or patients undergoing chemotherapy treatments with nausea and vomiting as a side effect. This drug is extremely contradictory. As it states that the side effects can be dangerous and scary, why would someone not just use marijuana?

This is a continuation of the agenda big pharma has pushed for decades since the reefer madness era. This specific drug is compounded with synthetic cannabinoids. Doesn’t it leave you scratching your head? If Insys denies the medicinal benefits of marijuana, how is a synthetic, dangerous, man made chemical compound any more safe?

Seems to be a popular trend that marijuana isn’t recognized as medicine by the FDA unless its beneficial to big pharma’s bank account. It begs the question, does the FDA care what we are putting in our body? Or are we just a number? Little to no research has been done comparing Syndros to marijuana.

The FDA has pushed this drug to people with already compromised immunity and strength to fight side effects off. Why is marijuana not considered medicine until it is in big pharma’s back pocket? The world may never know.