Colorado to Legalize Marijuana Use in Private Institutions 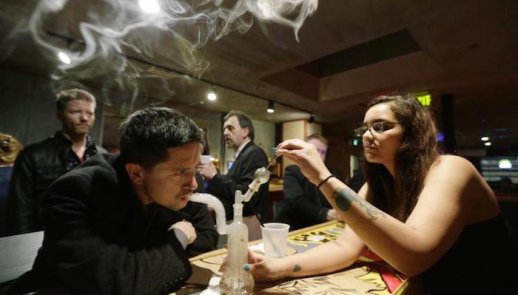 With the passage of Initiative 300, cannabis use is now permitted in private owned institutions. “Colorado has been sending mixed messages to tourists and residents for too long. We tell people to buy marijuana and then tell them, ‘Don’t smoke it in the store, the park, the sidewalk, the bar, or really anywhere else,’ Jonathon Singer, democratic state representative said to the Huffington Post. Colorado, along with other legalized states, have confined cannabis use mainly to homes and a few weed-friendly bars but this marks new terrain in a legalized landscape.

Though Initiative 300 is a progressive new change to the marijuana climate, it still isn’t without its restrictions. Being labeled as a four-year pilot program by the Initiative’s official website, smoking indoors in private institutions is still prohibited under Colorado’s Clean Indoor Air Act. Vaping and other nonsmoking cannabis consumption, however, is permitted. An odor control plan will also be in place and multiple complaints can result in a business losing their permit for indoor cannabis use. All permit requests are handled by the city of Denver and institutions that apply for permits follow the same guidelines as existing cannabis shops. An institution cannot be within 1,000 feet of places where children are present such as; schools and parks. Neighborhoods also have authority to reject an institution’s request for a permit or to impose additional requirements for the institution.