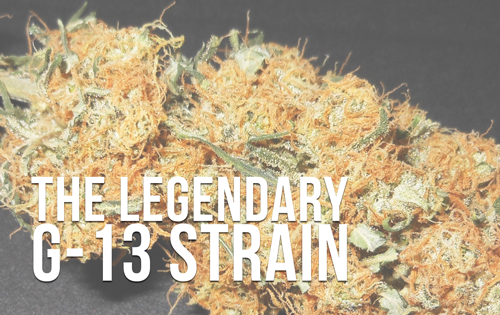 G-13 is a potent indica strain of cannabis that beckons tranquility and euphoria in the user, and has a history shrouded in secrecy

While the truth behind the lore of G-13 may always remain in the shadows, legend has it that this dreamy strain of pot was developed in the 1960’s by government agencies such as the FBI and CIA, who gathered up the strongest clones of Afghani marijuana from breeders worldwide and began a top-secret research study at the University of Mississippi.

The goal of this covert research was to hybridize these top strains and turn them into super strains. The result was several strains ranging from G-1 to G-23, each slightly different, and of these, the magical number G-13 was deemed to be the best strain of the bunch, and the story of how G-13 escaped the confinements of a government run lab is equally as mysterious and intriguing.

It is rumored that an unnamed, rebellious technician at the Mississippi lab was convinced by Nevil Martin Schoenmakers, a well-known Australian cannabis breeder who was the founder of the first cannabis seedbank; The Seed Bank of Holland, to smuggle a single cutting of G-13 out of the lab.

The rest, as they say, is history and by the late 1960’s, G-13 was spreading throughout the United States like a hazy wildfire, ever increasing in popularity. G-13 became even more popular when Dave Chappelle referenced the mighty strain in 1998 in the stoner flick, Half Baked which featured a stoned janitor who managed to steal the “most potent weed ever known” from a research facility, and began spreading the herb throughout New York.

So, next time you come across G-13 you can thank the government and an unknown rebel for the high you are about to receive!