Do You Know What Black Cannabis Is?

As rare and mystical as it sounds, black cannabis does exist. Some strains can get very dark purple to the point that they almost appear black. Now the million dollar questions are, how does it get so dark and what are the benefits of smoking black cannabis?

Once you know the answer to this it may seem like common sense, but color changes in any plants are usually due to the climate that they grow in. Cannabis that is grown in warmer climates tend to have a bright green hue, where as the illusive black cannabis is grown in much colder environments making the plant produce compounds that turn it purple. 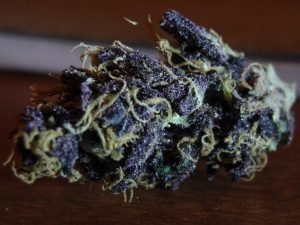 Anthocyanins act as a natural antifreeze for cannabis in these colder climates and are responsible for the change in appearance. This compound helps the plant retain water that usually escapes the leaves at it forms ice crystals between leaf cells.

There is also another theory proposed by researchers that anthocyanins are actually a form of protection against the suns harmful rays and helps other, more beneficial, types of sunlight be more easily absorbed by the plant. These types of sunlight are usually the blue and green wavelengths.

Overall it seems that plants tend to produce anthocynins when presented with stress. It’s been shown that plants going through a drought amp up their production of this compound and it may suggest that this is a characteristic that helps the plant survive in more harsh conditions than it is used to. 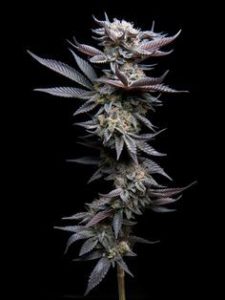 The Benefits of Smoking Black Cannabis

Genetically indicas have a tendency of turning purple more easily that sativas and generally are thought of to produce a higher THC content. This can make smoking black cannabis to be quite psychedelic and although that may be the case it doesn’t seem to be directly related to the anthocyanin amount. 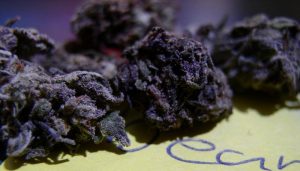 There are certain health benefits from consuming anthocyanins which include:

Lastly i’ll leave you with a few black cannabis strains that are out there:

Do you want to try black cannabis now? Share this article and let us know!