Cannabinoids 101: What is THCV? 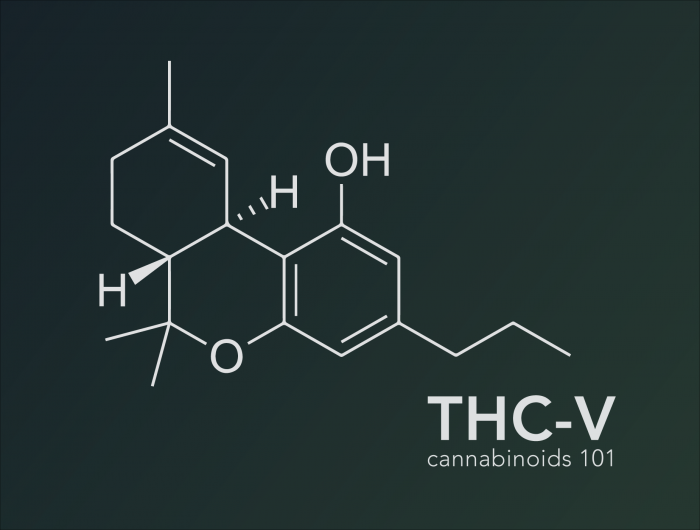 Cannabinoid research is one of the most interesting and groundbreaking fields occuring. There are currently 113 recognized cannabinoids found in cannabis and over 560 are newly discovered. This will allow for a wide range of strains to be created to treat specific ailments with a specific cannabinoid profile.

THCV, more formally known as tetrahydrocannabivarin (say that 3 times fast), is a molecule in cannabis that holds effects and medicinal benefits that sets it apart from more commonly known cannabinoids like THC and CBD.

THCV is a cannabinoid that has been on scientists and researchers’ radars since the 1960. With the recent upsurge in cannabinoid research and advancement in the understanding of cannabis, THCV is finally getting the mainstream attention it beckons.

Warning, confusing science incoming: The process of forming THCV is a bit different than common cannabinoids like THCA, CBD, and CBC.

The biosynthesis of those common cannabinoids begin with GPP (Geranyl pyrophosphate) and olivetolic acid reacting together to produce CBGA. From there, CBGA can be synthesized into either THCA, CBD, or CBC depending on which enzyme is introduced.

The biosynthesis of THCV is very similar but slightly different. It occurs when GPP reacts with divarinolic acid (instead of olivetolic acid) and produces CBGVA (cannabigerovarin acid). This chemical can then be synthesized into THCV.

Researchers have referred to THCV as “THC’s 1st cousin” due to its molecular structure being only a few carbon atoms away from mirroring the primarily known THC.

The effects & future of THCV

There is a lot promising research that has happened in recent years:

A study in 2011 showed that the antioxidant and neuroprotective properties in THCV may hold a promising therapy to those suffering from Parkinson’s disease. THCV has the ability to activate CB2 receptors while blocking CB1 receptors. This overall can help alleviate symptoms and delay neurodegeneration in people suffering from the disease.

This study in 2013 wanted to analyze if THCV would help fight those suffering from obesity. In lean mice, THCV resulted in less eating and body weight reduction and these scientists wanted to discover if the same effects would occur in genetically obese mice.

Unfortunately THCV didn’t significantly affect the food intake or weight gain in the obese mice. However, they did discover something just as interesting. The obese mice showed an increase in energy expenditure and improved levels of glucose tolerance.

These are just a couple of the promising medical effects that THCV can have on a person. There is a very large and unexplored world in the cannabinoid field. We are going to see a ton of groundbreaking research as time progresses and more scientists receive more funding.