Terpenes 101: What is Limonene? 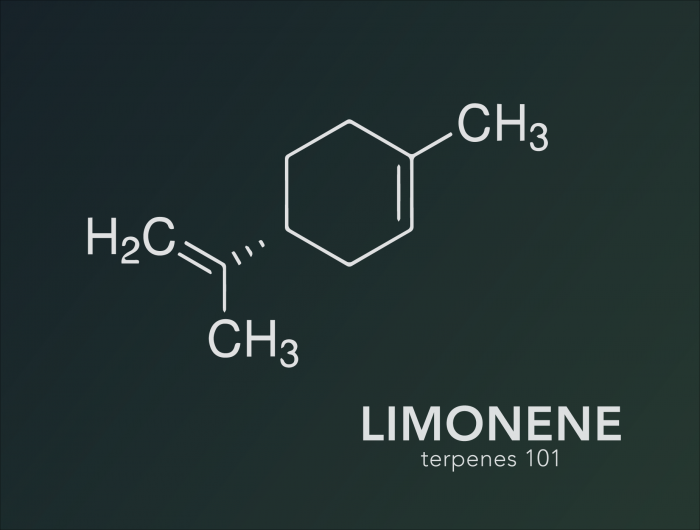 There is a reason that your favorite strains such as Lemon Haze, SFV OG and Tangerine OG give off such a citrusy aroma. Terpenes are scented lubricants secreted in conjunction with popular cannabinoids like THC and CBD.

Limonene is a sweet-smelling cannabis terpene that is produced in the resin glands of the flowers. Limonene is very similar to citrus in its aroma. It is also present in other things such as citrus fruits, perfumes and more.

Limonene terpenes are not only known for being the commanding factor attached to the lemony smell of some popular strains of marijuana, but they also have the ability to modify its effects.

The effects of the limonene terpene

Since the limonene terpene has been present in other things such as citrus foods and other plants, its effects have been studied early in modern medicine.

The Limonene terpene is credited not only for its stress-relieving effects, but its ability to uplift mood as well. The Limonene terpene has also showcased the ability to regulate gastric acid and increase assimilation of different terpenes such as Pinene via the digestive tract and mucous membranes throughout the body. Limonene is also praised for being antifungal as well as antibacterial terpene

In theory, since limonene is present in other plants and not simply in cannabis, these effects and benefits can be gained from fresh lemons, limes, oranges and grapefruits.

Due to limonene being available not only in cannabis, but in other citrus-type plants, you can buy it in it’s concentrate form.

If you are searching for limonene in your cannabis strains, ask your budtender which strains they have that yielded high levels of this terpene. High traces of limonene can be found in popular strains such as San Fernando Valley OG (or SFV OG), Super Lemon Haze, Durban Poison or any top-shelf strain with ‘lemon’ in its name or genealogy.

In cannabis strains such as these, limonene can make up approximately 1 to 2 percent of the terpene profile. Here is a rule of thumb: If it smells like fresh lemon Pledge or Awesome Orange, chances are those limonene terpenes are present.